This past Saturday I ventured out alone to attend the 1st annual Juneteenth Festival being held at Hermann Park in a city near my home town called Goldsboro, NC. I really enjoyed myself at the festival, but what I did after I left the festival really made my day. I heard about another local event happening downtown, a Car Show. Now, I am no car fanatic but I love a good event and thought it would be nice to walk around downtown for a bit as the area is really growing and changing from what I remember growing up. 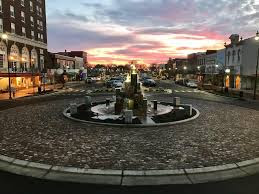 Rewinding a little bit to a couple of weeks prior. I met someone who surprisingly is a bigger foodie than me...surprised? I know I was! His name is Archbishop Anthony Slater, and I am not sure if he should run for mayor or be crowned Goldsboro's Foodie King. If you want to know anything about what's going on in Goldsboro or where you should eat and what you should get, he's your man! All the owners and chefs know him, and he even has secret menu items and a dish named after him at one restaurant! Man...I really have to step my game up. Anyway, I said all that to say that we had lunch at a nice spot called China House and he got me very excited about what is happening in the food scene in Goldsboro. 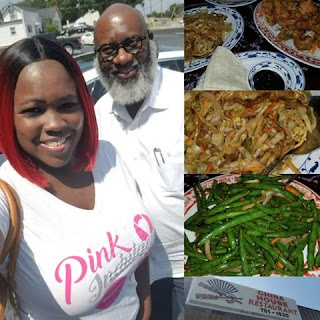 So when I decided to go check out the car show I decided to reach out to him to see if he was out and about at the show, and of course, he was! He's the mayor duh! He invited me to hang out with him and a few friends at this place called "The Ice Storm", and yes it was an ice cream shop and you guys know ice cream is one of my biggest addictions. So I was very excited! It was a hot day and I was walking around, so ice cream sounded like a perfect idea. After some bad directions and a tour of downtown from being lost, I finally made it. "The Ice Storm" is a cute black-owned ice cream shop right in the heart of Downtown Goldsboro, but it's not just any regular smegular ice cream shop. There were so many hidden jewels in their 7-year story, and as I began to talk to them I was more and more amazed by their creativity and how everything in the shop and about the shop was done with purpose.

The idea was inspired after an industry crash and the decision to do a year's worth of traveling and trying new foods. "The Ice Storm" is a green company and they do things such as use recyclable materials for their spoons and straws and they decorated with colorful wood designs on the walls that were leftover rubbish from a fire. They also wanted to showcase what they felt helped raise them...music. So they have a music wall that gives tribute to hip hop.

Although they may be located in a fairly small town, they have made a big name for themselves being the only place in NC that has the dairy-free kosher colorful ice cream cones that they offer. They were even highlighted by Times for their delicious fresh squeeze lemonades! 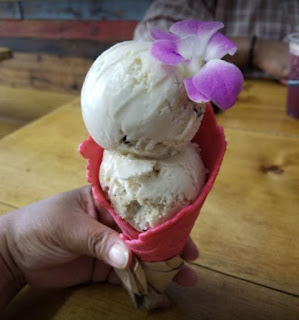 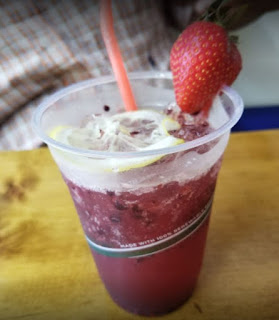 Now that you have heard all about the background of "The Ice Storm", I know you're probably wondering what I ate. After tasting their new peach flavor which was yummy, I decided to get my go-to mixture, cake batter ice cream, sprinkles, and extra Oreos. I also tasted their mango smoothie which is made from mangos they peel and slice themselves. Yvonnia, one of the ones that operators of the shop, mentioned peeling so many boxes of mangos that her hands cramped up. That's how you know everything they make is fresh and made with love. I think of my next trip I am going to try their zucchini fries and a smoothie or lemonade. And yes, they have food too! Usually, you try to avoid a storm, but this is one storm I enjoyed!

Next time you're in the Goldsboro area make sure you check out "The Ice Storm" and follow them on Facebook!