My family loves to eat...both sides at that, so I was destined to be a foodie at birth. My sister, Vivian, was scheduled to get deployed at the end of September, so we tried to eat EVERYTHING under the sun during her last few weeks, and I think we did a great job at it. My weight might say otherwise though. One of the things we did was go to the NC Jerk Food Festival in Durham last Saturday the 21st. 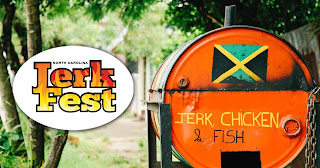 I found the festival on Facebook, and my mom's side of the family being from New York LOVES some authentic Jamaican and Puerto Rican food, so I knew they would be excited to go. Although we originally had a larger group going, because of just life being lifey, it ended up only being me, my sister, and my nana. 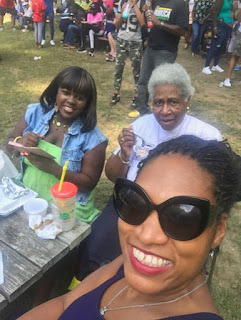 The festival wasn't as large as I was expecting it to be seeing that it was in Durham, but there was enough food to go around, at least while we were there. My best friend, Brittany, had warned me that in a previous year she got there late in the afternoon and the lines were way too long, and they were running out of food, so I took heed and went earlier in the day. Thank God we did because about the time we got done eating, the lines were so long OMG! After talking to the organizer, Dwayne Francis, I learned that the venue had changed since its start, and maybe moving again if they can find a better venue. He feels that they have outgrown the location and that the parking wasn't very conducive to their event which is understandable because that walk was like a mini hike.

Dwayne was the originator of the event. Being from Jamaica and moving to American in his adulthood, he wanted to bring a piece of home to his new home. So he and his team started the festival in 2014 just one year after he started a non-profit called CaribSplash to help raise funds to help the people in his home country. Being big in giving back, I was excited to find out that funds raised at the festival not only supports the businesses but also helps kids in Jamaica by providing educational materials, sporting equipment, and food for the schools. Eating for a cause...sounds like a win-win situation to me! 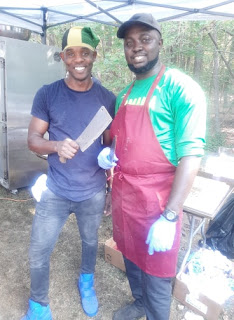 Head organizer, Dwayne Francis (on the left) and a member of his crew, Bryan

There was entertainment all day, activities for the kids, performers like JamRock Reggae Band, and a DJ when there was no live band on stage. When it comes to Reggae, you can't listen to it and not move just a little bit. Even my nana was jammin'! There was also a good variety of vendors, and I enjoyed the window shopping. I did buy some African swag from a vendor that I can't wait to wear. 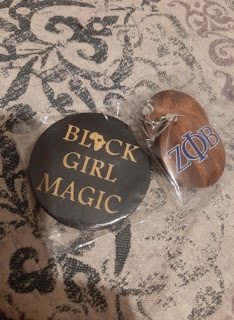 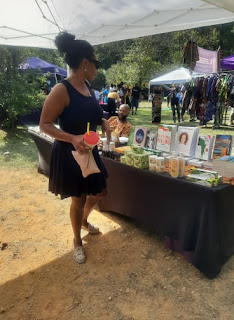 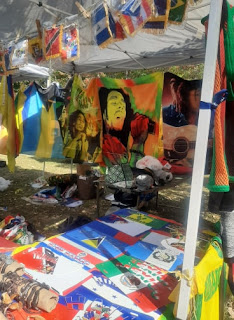 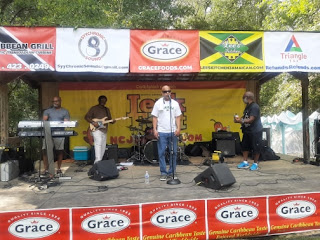 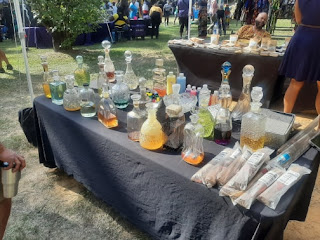 Now....to the food. What can you say? I know all my social media followers were mad at me last weekend when I posted about the festival but teased them by not posting my usual photo of my food. If you are a fan of Jamaican, you would have loved it. I'll just say that! When it comes to festivals, heat, and lines, you gotta strategize, and that's exactly what I and my sister did. We split up and met back at the picnic table where our nana was with lots of different things. Vivian even somehow was able to suave someone in line so she could get out of line to get us drinks from another vendor and then get back in her same spot in the food line. Gotta love the hustle!

So here it goes....we had jerk chicken, jerk pork, curry chicken and rice, oxtails, brown stew chick over mac and cheese with carrots and potatoes in it (which was my fav by the way), festival (which is in our lingo a hushpuppy), a beef pattie with coco bread, carrot cake (so nicely given to us by our table neighbor who was stuffed), and lemonade to wash it down. Yeah...we went in a little bit. I apologize in advance for the not so fantastic messy photography, but we were hungry and couldn't wait and I literally almost forgot to even take pictures because I was so happy to be eating it. lol! But believe me, the photos don't do the food any justice...it was delicious! 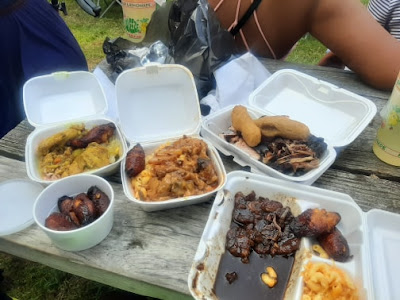 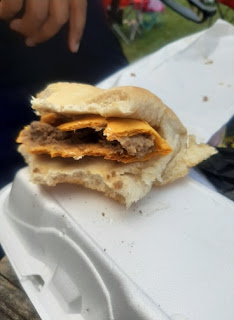 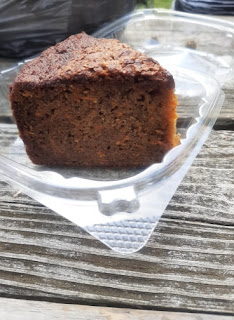 We ate food from Lee's Kitchen, which is a popular Jamaican restaurant in Raleigh, and Patwah which is where Dwayne was not only managing the festival but showing his skills as a grill master as well! 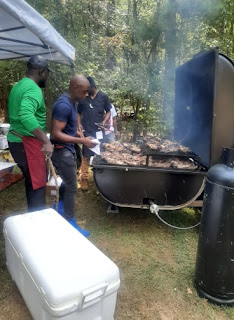 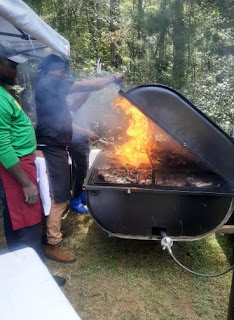 When people think Jamaican cuisine they normally think about jerk chicken first. Known for its hint of spiced meat served over rice and beans with a side of plantains, jerk can be chicken, beef, pork, goat, boar, seafood, or just vegetables. It's more about how you cook the meat and the taste which is flavored with a marinade of pimento also called allspice and scotch bonnet peppers also known as habaneros. It is then cooked and smoked over pimento wood and burning coals. Jerk is actually popular all over the Caribbean. The way it's smoked is also important. It is believed that jerk originated in Jamaica from the Taino people (an extinct group of Arawak people who once inhabited the Greater Antilles and the Bahamas), who developed the method and then taught it to escaped African slaves of Jamaica called Maroons. The word itself is actually a Peruvian word that means dried strips of meat.

I enjoyed everything I tried. But that brown stew chicken was to die for. Even though we had a table full there are things I didn't get to try, like the Trinidadian vendor booth that must have been good because it had the longest line. I plan to go back, but like I said the festival may be moving next year so make sure you follow them on social media or check out their website below so you won't miss it next year.

What's your favorite Jamaican dish? You know what to do! Leave me a comment!