Why Did the Chicken Cross the Road?

It always seems like everything happens all at the same time whether it's a bunch of things going wrong simultaneously or just multiple events happening the same day. Well, I had one of those days two weekends ago. The huge 99th annual Veteran's Parade was being held in Warsaw, a stew festival was being held in Albertson, and the Poultry Jubilee was going on in Rose Hill. Me oh my, what is a foodie to do!? By the looks of the title of this blog, I'm sure by now you have figured out what I choose to attend. 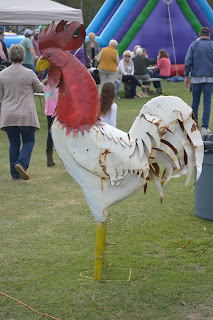 I was actually able to go to two of the events luckily. I had to go to the  99th Veteran's Parade to take photos for the Duplin Times, so that one was a no brainer. So my major dilemma was deciding if I was going to go to the Poultry Jubilee or Stew Fest for lunch after the parade. I decided to go to the Stew Fest because a big bowl of chili sounded right up my alley that day, and I feel like I eat chicken all the time.

I didn't want to go alone so I reached out to a good friend of mine named Bryan to see if he wanted to go along with me. He agreed, so once I got done working at the Parade, I messaged him to let him know I was on the way to Stew Fest. I just so happened to check my social media and saw that another friend of mine named Kiona was at the Stew Fest, so I reached out to her to let her know I was on the way there too. She broke my heart when she told me that it was almost over. LIKE WHAT!? It was only like 1:00 and it started at 11:00! So I just sat there and drooled for a minute while watching her Snapchats that showed all the chili they were eating. Luckily, we had another option, so we headed to the Poultry Jubilee instead.

Although I am from Duplin County and the Poultry Jubilee has been around since 1963, I am not sure I have ever been to the event. The poultry industry is huge in NC, and there is a huge Butterball plant in Mount Olive and chicken plants called House of Raeford Farms that are located in the area which is why Rose Hill hosts the yearly event. The industry has a huge impact on our community here. Here are a few fun facts provided by the Poultry Jubilee website.


Now that I have overloaded you with birdie knowledge, back to the Jubilee. Upon arrival, I was shocked to find good parking because at festivals, it can be hard. There were activities and rides for kids, entertainment on the stage, and lots of food and retail vendors, a wing-cookoff, and a wing eating contest. One thing that Rose Hill is known for is their huge frying pan that they actually cook chicken in during the event. The world's largest frying pan, which holds 200 gallons of cooking oil, uses 40 burners, and holds up to 365 whole chickens at one time is located right in Duplin County. 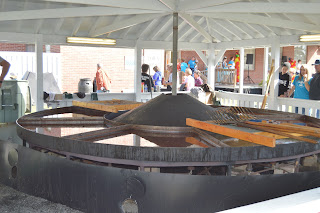 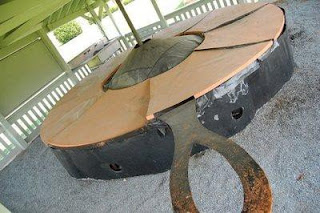 I kept debating with myself at the event. I felt it was only right to try some fried chicken from the large frying pan, but I really wanted a bbq sandwich from a vendor I found while walking through the event. I chose to give in to my desires and get the sandwich, but I can say that I didn't leave without getting my poultry on. I ate some of Bryan's gigantic turkey leg while he wasn't paying attention (secrets out). Sorry, not sorry! It was from the same vendor, James and Mary's Creative Country Catering, out of Burgaw who told me they had been in business for 27 years and was the 1st and only food vendor to come out to the Jubilee when it started many years ago. The food was good, and I am glad I followed my urge to eat bbq! 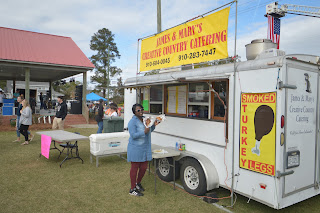 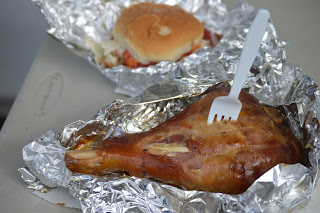 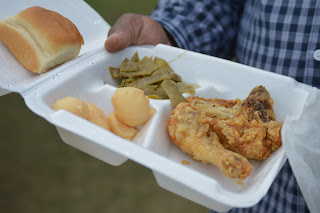 So the answer to the reason why the chicken crossed the road...was to get away from the huge frying pan in Rose Hill! 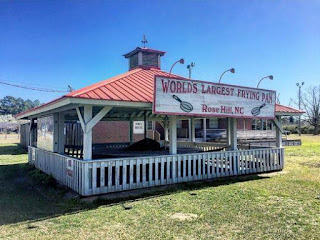