I moved away from Duplin County for 10 years, and honestly not much has changed since before I left to go to college, but on one of my visits home to see family, I was in the town that my high school, East Duplin, is in and noticed a Thai restaurant. I had to do a double-take because I couldn’t believe there was a Thai restaurant in little ol’ Beulaville. Duplin County definitely isn’t known for our variety of foods. 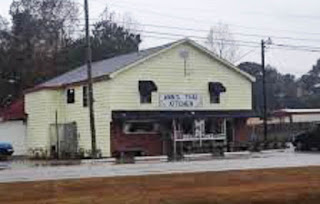 It was many years later before I actually ate there; it was just a couple months ago, actually. I had forgotten that it was there until one of my coworkers, Alan Wells, who knows that I am a big foodie, asked me if I had tried it. He told me that they were going to be closing for a month because the owners were going to Thailand on vacation, so I had to move quickly or wait until they got back.

They are located right around the corner from one of the gyms I work out at, so one day after a workout, I convinced two of my workout partners, brothers Bryan and William Davis, to go there with me to eat. It was a cute little quaint spot. There have been quite a few restaurants in that building, but I loved the atmosphere they have built. It’s dimly lit but has a really nice vibe.

The owners are Ann and Tim Deaver. Ann is from Trat, Thailand. Tim is from Richlands, where they currently reside, and since Beulaville was closeby and didn’t have a Thai Restaurant already, they thought it would be a good place to open their business. They now own the building. They have been open since June 2013, and serve lunch, dinner, coffee and other beverages. Ann said that she loves working in Beulaville. 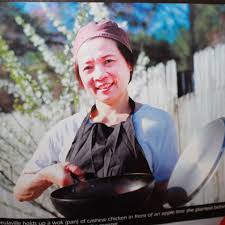 It didn’t take long to get our food. I  was torn between the drunk man noodle or the lard na. I ended up ordering the lard na. It was a light refreshing soup that had broccoli, baby corn, cabbage, and chicken in it, to name a few of the ingredients. I hear it’s one of their most popular dishes. Thai food is known for primarily serving soups, curries, rice dishes, rice noodles, veggies, meats, and lots of seasonings that can be customized to taste.

Some of their other popular dishes also include cashew chicken, fried rice, crab Rangoon, spring rolls, and Tom yum soup, which is a clear soup that people love with lemongrass, lime leaf, ealangal root, mushroom, tomatoes, cilantro, green onions, and fresh lime juice can come with chicken and shrimp. They gave you a very large portion of it as well. My meal came with rice, and they even made it into a cute little heart. 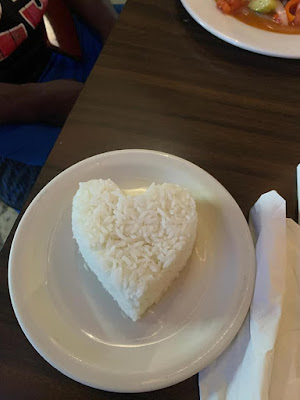 We also ordered the potstickers and fried wings as appetizers. I am not a huge wing eater. I’ll eat them if they’re at the table, but I don’t go out ordering wings often, but those wings were to die for! I would literally take that 20-minute drive to Beulaville just for those wings. They had a perfect crisp, and the seasoning was just right.

Ann’s Thai Kitchen also had great service and everyone in there, workers and people just there eating, were so friendly. We all laughed and joked with each other and I saw a couple of old high school classmates and a teacher that I have not seen in years. The owner even welcomed me to join her on her next visit to Thailand.

Everything I tried that day was great, and I would definitely suggest checking it out. I give Ann’s Thai Kitchen an A!

Have you been there? If so what did you eat?
Posted by Salinarose24 at 8:00 PM