When I was first introduced to The Last Taino, I was under the impression it was a Mexican food truck which is great because I do love Mexican food, but once I checked out their Facebook page and found out they had a Puerto Rican Twist, I was sold! It was going to be the next stop on the “Duplin Eats” train. My mom grew up in a predominantly Puerto Rican neighborhood called Bay Ridge in Brooklyn, NY, so as kids, she introduced us to the tastes of Puerto Rico and my siblings and I have loved it ever since. We found a great spot near my sister’s old apartment in Fayetteville and almost every time we are in the area we go there. We actually went last week. She also cooks it sometimes at home. It’s hard to find Puerto Rican food in this area, so we were excited to go check it out. 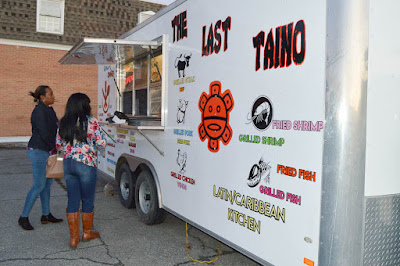 The Last Taino usually parks at 206 E. Main Street in Wallace Thursday-Saturdays and occasionally they will do an event for a school or something when asked. When we got there we were greeted with smiles by the owner Yancy Guilbe or “Boss Lady” as she is known as and her son Luis Guilbe. They are from Puerto Rico and have pride in not only their food but in their culture.

To my surprise, the menu was a mix of Puerto Rican and American dishes such as Chicken and Waffles, hot dogs, and cheesesteaks for instance, and they serve breakfast, lunch, and dinner. Regardless of which cuisine you choose to eat; Boss lady is known for putting her twist of seasonings on everything she cooks. Their food truck has been open for about two years, and her son, she worked very hard to save for many years so that she could open it.
I was curious what the Last Taino was and why she decided to name it that so I asked and was told that it is an Indian tribe in Puerto Rico and other areas such as Cuba, The Dominican Republic, the Bahamas, etc. So they decided to name their truck that because of their roots and ties to the tribe. I can tell just through the few conversations I have had with Boss Lady and her family that they are very family-oriented. The business is fully family-run, and they even have grandpa as security sometimes. That made me chuckle when I heard it. She learned her skills in the kitchen from her mom growing up and has been in love with cooking and feeding people ever since. 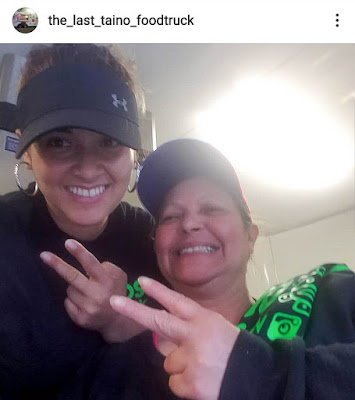 Boss Lady with her mom Minga has spent a lot of time in the kitchen together since she was a child.

When we got there she already had some samples ready for us, and when I say samples, I mean two full meals and some additional things on the side to try. Haha! Let’s just say she was very generous and it took us two days to eat everything. Crazy thing is, the food was just as good as leftovers as it was fresh. That doesn’t happen very often.
She gave us a steak and shrimp taco plate because that is my co-worker, Alan Wells, favorite thing to eat and he is the one that recommended that I check them out. Unfortunately, I am allergic to shrimp so my mom took that plate. I was given a plate with a fried pork chop covered in a very flavorful garlic tomato-based sauce that had marinated onions in it and a steak taco. Man! The flour tortillas were cooked to perfection. Both plates came with rice and beans and plantains. We ordered extra rice and plantains because we love them so much. The tacos were what Taco Bell eaters would call supreme: lettuce, tomato, and sour cream, but she also had a surprise topping…homemade BACON BITS! EEK! If you follow my column you will learn that I love pork and will add bacon to a dish in a second. 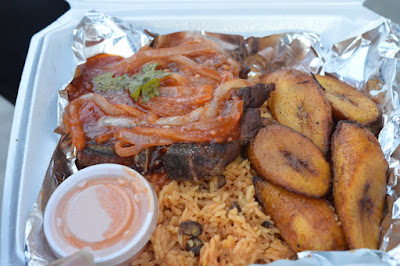 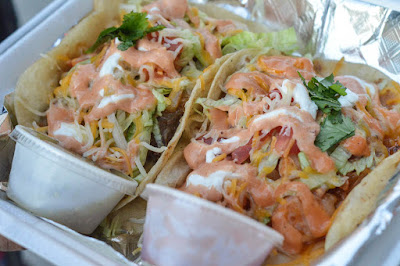 We also were given some house sauce which is one of their most popular things. People say it’s good on everything, and I believe it. That stuff was love! It’s similar to the color of thousand island, but you can’t even put the two in the same category. I dipped and dipped and dipped. Boss Lady told me that she loves to see the reactions on people’s faces when they eat her food. Cooking isn’t a job for her because of all the smiles and joy. To see people happy when eating her food makes her feel accomplished and it should. The food is amazing.

Boss Lady is also known for her big heart and for being someone with good values. She loves her community and often gives free meals to officers on duty and people who are in need. Luis said even when she is upset or going through something she always seems to find a way to help anyone who needs her. She told me that she has told her kids from a young age that it is important to always give and help if you are able because tomorrow the shoe might be on the other foot. I will be back soon Boss Lady!

For many reasons, I am giving The Last Taino an A+

Check out The Last Taino on Facebook and hit me up for a promo code to get a free taco on your visit.