Duff’s Café gets an A+ for Southern Hospitality

NC and the south, in general, are known for its southern hospitality, and Duff’s Café in Beulaville falls right in line with that stereotype. From the moment you walk in, everyone is friendly, smiling, and very welcoming. You can tell the people that are in there are regulars and enjoy just hanging out there just because of how the environment makes you feel. 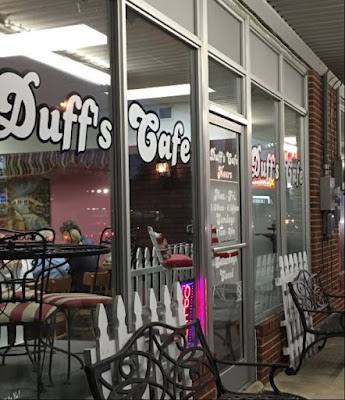 When I first walked in I was greeted by the owner, Janet Miller, who I spoke with on the phone briefly earlier that week. It was nice to be greeted by the owner herself as typically in restaurants, you never even get to see or meet the owner. She let me know I could sit wherever I wanted and she would be with me shortly.

I sat down right in the middle of the restaurant and the place was packed! They were very busy and there were only 2 waitresses, but I was helped right away surprisingly. My waitress was awesome; her name was Nanette and she was super friendly, and I found out that I went to high school with her son. I watched her as she sped from wall to wall making sure her customers had what they needed and were happy.

I checked out the menu and was instantly confused. There were too many good options. There were menu items that are hard to find at restaurants like stew beef and rice and RUTABEGAS! I love rutabagas, but for some reason, it is not a popular menu item and you barely ever see them on restaurant menus. I narrowed my choices down to the stew beef and rice, hamburger steak, or roast pork and gravy. I decided to go with the stew beef since it’s been a while since I had some. I ordered, of course, the rutabagas and cabbage as my sides. The meal came with bread and tea as well and only cost $7.50 for the meal. Not bad right!? I also requested to sample the pork barbeque. Growing up in a barbeque restaurant and coming from a family known for their barbeque, you tend to be curious about the taste of other restaurant’s barbeque. You are always curious to compare it to your own. I’m judgmental...it’s a shame, I know. Put me in time out already! 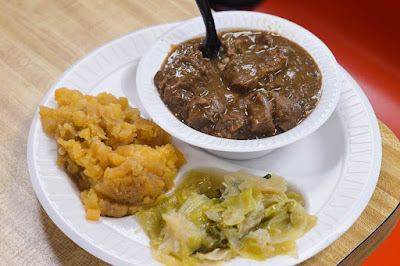 I was very pleased with the taste of the food once it came out. I had to add a little salt to the stew beef, but it had a lot of gravy and meat which I liked. The cabbage really surprised me! I was debating if I was going to get the cabbage because I like mine cooked kinda sweet, but it was SO flavorful. I wish the portion size was larger; I wanted more. The barbeque was ok, but once again, I am very judgmental when it comes to barbeque so try it for yourself. I also had dessert, the chocolate cake which was to die for! It was made with a very dark chocolate, almost like devil’s food cake, and it had a cream cheese icing. It was so good I got one to go.

Janet said that the most popular items were the hamburger steak, turkey and gravy served on Sundays, and the banana pudding. All the food is fresh and from scratch and not frozen, and you could tell it. I ended up bringing some home to my grandmother along with a slice of pineapple cake. I also ordered a plate of hamburger steak and rice, fried squash, and mashed potatoes and gravy for my mom. I ended up eating the majority of her food that night! HA! I LOVED the hamburger steak. I will definitely be back for it soon. 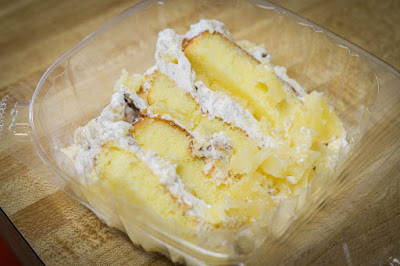 Pineapple cake that I took home to granny

Duff’s Café isn’t new to Beulaville. Janet’s parents ran Duff’s for 17 years’ way back when, and she worked in there when she was younger. She now serves the same food they served. Trying to fight her destiny to open it back up, Janet tried many other careers of work like being a barber on base in Jacksonville, owning her own barbershop in Pink Hill, owning a printing/embroidering gift shop, and being a farmer’s wife and mom. She said she enjoyed those things, but they weren’t her passion. She told me she wished that she would have given in and opened the restaurant 20 years ago because she loves it so much. 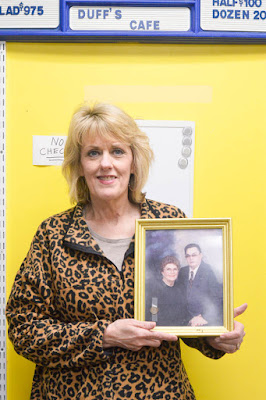 Janet Miller holding a photo of her parents,
the original Duff's Owners

Her husband Tony inherited the building that Duff’s is in now, and she has been operating it for 8 years. Before opening it, she was operating the gift shop there, and kept a lot of the same designs and decorations. It was designed to look like you’re walking downtown. That was to match the name of the previous business, Main Street Embroidery which she ran for 2 years. 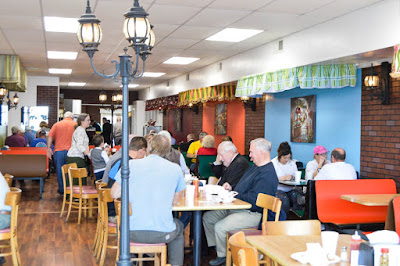 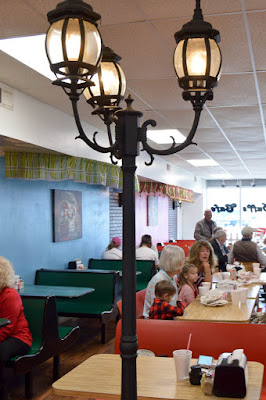 Janet and I had a great conversation. I also went to school with her daughter Polly and her younger daughter Norma is a media and journalism like I was. Also, we both were raised in a family restaurant, so we had a lot in common. She actually sat at the table with me during lunch hours and we just talked and talked and talked. Most owners/managers would be freaking out worrying if things were going ok in the kitchen, but she focused on me and our conversation. That meant a lot to me. You could tell she really loves people and her employees. 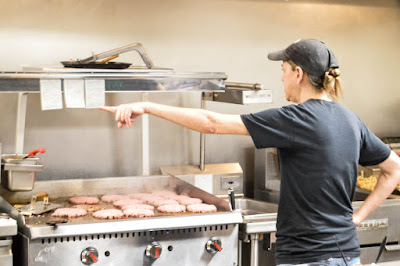 One employee helps manage the kitchen for Janet

When I asked her what her favorite part about owning Duff’s Café was, she said, “I’m a people person. I love people, I do. I really do. I could go back to cutting hair but this way I’m blessing a lot of the girls with jobs for their families. So it’s a way to give back”.

Because of all of the above, I give Duff's Cafe an A+ because of their great southern hospitality. Have you ever ate at Duff's? If not, are you considering it now? I sure do hope so!