Today on #NationalInternationalWaffleDay, I was pondering on how many people are like me and prefer Waffles over pancakes. My mom is team pancakes, so we are often battling between going to a pancake spot or to Waffle House because I love me some Waffle House! 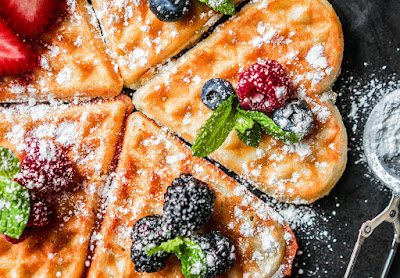 When I lived in Idaho for 4 years, every time I came home to visit one of my 1st stops was always the Waffle House. I HAD to have it before I went back. Their waffles are cooked to perfection! I mean, how can you not be on #TeamWaffle when waffles are so perfect. Crisp and buttery on the outside and fluffy and soft on the inside, you just can't go wrong with that combination. Don't get me wrong, I do like pancakes, but they are so difficult to eat lol! I like texture to my food. Pancakes soak up your syrup causing you to use too much, and then if you don't eat them fast enough, they get soggy....eeeel....who wants to eat soggy cold pancakes?! 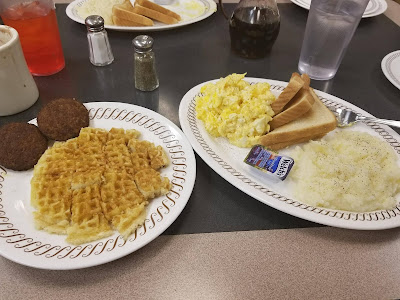 Also, you can make your waffles taste so many different ways. A typical waffle usually has butter and maple syrup, but there are endless toppings that you can add either on top of the waffle after it's cooked or added to the batter before it's cooked. Popular toppings you normally see are whipped cream, chocolate chips, powdered sugar, and fruit (strawberries, blueberries, bananas, etc). You can even eat waffles as a sandwich. One of my favorite breakfast meals is a homemade waffle sandwich. 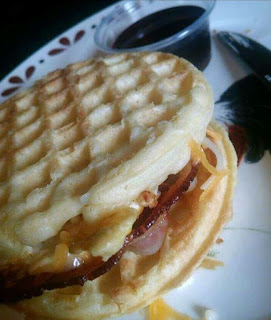 The waffle as we know it today was first seen around 1185 by the French. It was called the walfre or walfla (honeycomb or cake). Then the dutch called it the wafele or wafel. It was first introduced to the English language in 1725 as the word waffle. Over the years, it has owned many aliases around the world such as: waffe, wafre, wafer, waufel, waufre, iauffe, gaufre,  goffre, gauffre, wafe, wafe, wāfel, wåfe, vaffel, and våffla.

During ancient times, the Greeks would cook their version of waffles called obelious which were flat cakes cooked between hot metal plates over an open fire. They called them wafers.

International Waffle Day was first celebrated in Sweden, but is also greatly celebrated in Norway and Denmark. It takes place on the Feast of the Annunciation or "Lady Day" (Våffeldagen) a holiday that commemorates the visit of the Archangel Gabriel visited the Virgin Mary to inform her that she would be the mother of Jesus Christ. The word waffles sound a lot like Våffeldagen in faster speech hence the beginning of "Waffle Day", so waffles are typically eaten on this day.

In the United States, National Waffle Day is actually celebrated in August to celebrate the date the waffle iron received its patent. The waffle iron was a gift to waffle lovers all over the world from Cornelius Swartwout of Troy, New York in 1869.

The basic ingredients of a waffle are flour, water or milk, and eggs. Other ingredients you might see are salt, baking powder, sugar, and vanilla extract. There are alternative versions such as whole wheat waffles, zucchini waffles, buckwheat waffles, and gluten-free waffles.