I've only had empanadas a couple times and it was from a restaurant not homemade, but with today being #NationalEmpanadaDay I think I want to try to make some myself. 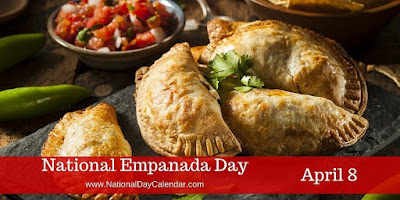 The word empanada came from the Galician, Portuguese, and Spanish verb "em pandar" which means "to wrap or coat in bread". To make them you fold dough or bread around a seasoned stuffing mix of your choice. Then you can either bake or fry them. There are so many different empanada variations that you can make from empanadas stuffed with a been mix that can be eaten for lunch or dinner or a  dessert empanada stuffed with a fruit filling that can be eaten as breakfast or a snack. 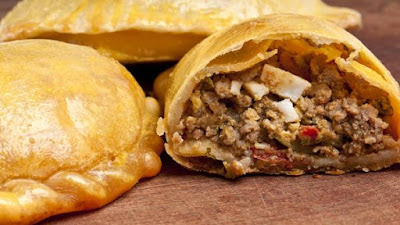 Like most things, empanadas change depending on where you are in the world. For example, in the Southern and Southeastern parts of the United States, they are called Creole which is more of a savory dish filled with meat such as pork, beef, or chicken and then cheese. This is the more traditional form of empanadas. But if you head to the Southeastern part of the country you will find that empanadas are more than likely going to be eaten as a dessert or for breakfast and be filled with fruits like apples, peaches, or sweet potatoes. Ten, if you go to New Mexico, empanadas are eaten as part of Christmas or winter traditions. There they use sweetmeats, like mincemeat which is ground pork, sugar, pinon nuts, cinnamon, cloves, and nutmeg to make the filling. Everything is then sealed in a tortilla-like dough and deep-fried in lard.

Like I mentioned earlier, I would love to try to make some from scratch so if you have a homemade recipe please share!