I dropped off my vehicle, I call him Roscoe, at a mechanic shop in Teachey last week. I had my mom come pick me up, and we somehow wandered into Wallace instead of going straight home. It was later in the evening, so I was beginning to get hungry. I decided I wanted to go to The Last Taino, a food truck that I wrote about in a previous column. I follow them on Instagram and have loved everything I have tried from their food truck so far. Unfortunately, they were not open that day. On the way to their truck, we passed another food truck that caught my eye because it was bright green. I was thinking, “That is an interesting looking food truck". I was curious about what it was, but I had my mind set on The Last Taino, so I drove right by it.
Once I figured out I had to find something else to stuff my face with I figured what the heck, why not try it out. It’s located on Norwood Street in Wallace. So it’s right in town on one of the main roads. It’s not too far from Bill Carone Chevrolet and it is also where the stockyard is (on the opposite side of the road). Once I arrived, I realized that it wasn’t Mexican food but instead Salvadorian food so my first instinct was to get the pupusas because I already knew I liked them. I usually get pupusas from El Sol restaurant in Faison. I wrote about them in last month’s column. I decided to be brave and try something new.
It’s called Trio Sabroso which translates to “good tasting food”. It is owned by Yully (jewl-e) Martinez and her 22-year-old son Nelson Martinez. They opened it up Thanksgiving 2019 when they set up at the popular Thanksgiving Day flea market event that typically hosts many food trucks. It was a Thanksgiving Day miracle because the truck did very well which is why they now set up every day in Wallace and are open to doing events as well. Yully has always wanted to sell food. Before having a food truck, she would sell plates on the weekends, according to her son who I spoke with about their restaurant. 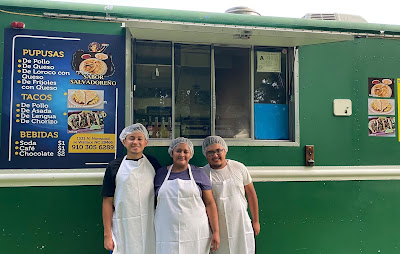 I had the baleadas. It is a Honduran dish that is also found in El Salvador. It is a flour tortilla folded like a taco with beans, eggs, cheese, avocado, and your meat of choice inside; I added sour cream. I went with chorizo. I was scared to get the chorizo because it is normally spicy, but their chorizo wasn’t very spicy. I guess you can say I had breakfast for dinner, Honduran style. I liked it. It wasn’t as good once I warmed it up, so I would definitely suggest eating it fresh. I also had their purple cabbage slaw. It had a vinegar base to it. It was different but it complimented the taste of the baleadas well. 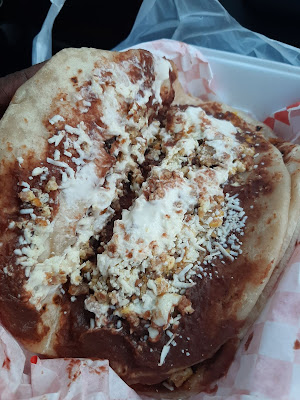 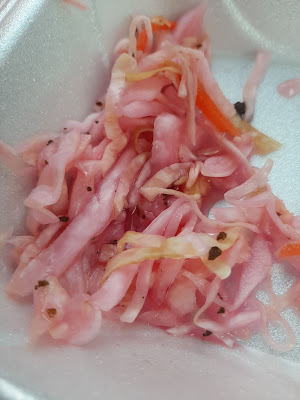 The feel like the food was very authentic, and Nelson confirmed that when he told me, “not many people know how to make good traditional pupusas around here”. The only downside to my visit was I did not feel very welcomed. She was not rude, but I almost feel like we caught them when they were ready to go, and so she was kind of short with me. It may have also been a language barrier. Either way, it wasn’t a bad experience that would prevent me from going back, so I give them a B.

It seems like dark rainy days have been hovering over us ever since the Coronavirus made its grand appearance into our lives, but it’s the little things in life that bring us joy. My little ray of sunshine came from a restaurant called El Sol, which means the sun.