It seems like dark rainy days have been hovering over us ever since the Coronavirus made its grand appearance into our lives, but it’s the little things in life that bring us joy. My little ray of sunshine came from a restaurant called El Sol, which means the sun.

El Sol Mexican Restaurant has been open for four years and is one of the few restaurants in downtown Faison. It is managed and operated by a local family, the Garcia family. The family is from Honduras and pride themselves on their culinary skills in not only Honduran cuisine but also Mexican and Salvadorian style meals as well. The Owner always knew that she wanted to have a restaurant of her own, and her family knew it and supported her dreams. Her sister found an open location in Faison, and along with other family members, helped her to officially get her restaurant off the ground.
I’ve eaten at El Sol a couple of times and haven’t been disappointed yet. So far, I have had the pupusas, tacos, enchiladas, and rice and beans. According to the family, pupusas are their most popular dish and are thick corncake flatbreads that are stuffed with things like cheese, refried beans, and/or your meat of choice. The dish is from El Salvador and was declared the national dish and even has an entire day dedicated to it.
This last visit, I had the enchiladas. I couldn’t decide between the chicken and steak so I got half and half so my plate had two of each. I enjoyed the chicken better. If you have been reading my columns than you probably have figured out by now that I love everything extra saucy! So of course I had my enchiladas made with a lot of enchilada sauce and extra sour cream. They were oozing with cheese, and my beans even had melted cheese on them. When I tell you, those were the best enchiladas I have ever had, it is not an understatement! They were made so perfectly and they put the perfect amount of sauce and sour cream on them. I also added tomatoes which gave it a nice extra touch. What really surprised me was the rice. It was so flavorful. I could have literally just have eaten a bowl of rice and I would have been content. I haven't been that happy with rice since the last plate of rice my late sorority sister, Charlie, made me. It was a Philipino style white rice, and I still to this day do not understand how she made white rice taste so good. I miss her dearly. RIP CharleZ! 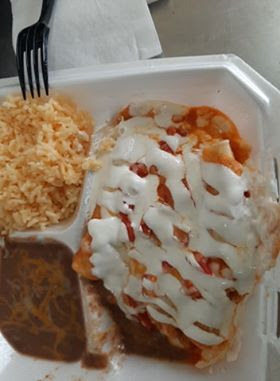 Believe me, this phone picture does it no justice

Anyway, back to El Sol, it was a rainy day went I went but they really did add a ray of sunshine to my day. I really enjoyed the enchiladas and I can’t wait to try something else from them. El Sol Mexican Restaurant gets an A+ from me!