In other parts of the country, having an amazing hot cooked meal in a grocery store is odd. But in the south, it’s the norm. A lot of our grocery stores serve breakfast, lunch, and dinner, and it’s not just sandwiches and salads. I’m talking a full 3 section delicious meal. And they're usually at a great price. 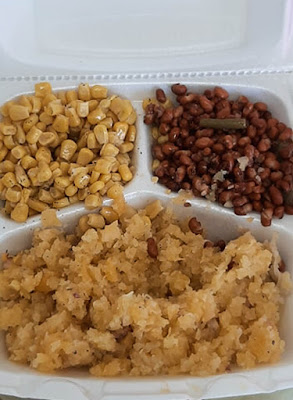 Piggly Wiggly is one of those grocery stores that serve food all day. I worked close to the one in Faison and visited frequently for food. I would normally get a full plate which includes a meat and two sides, but I haven’t been eating there as much lately, one because I changed jobs and my diet, but also because it seemed like all of a sudden everything changed about their deli. The food quality went down drastically! The faces behind the counter changed a lot and prices seemed to continually creep up. Maybe not, maybe it’s just me I was thinking. That was until I began to hear others complain saying the same thing.

Just to give you an example, I will tell you about my last 2 visits. The time before last, I went and got a vegetable plate. Two of my veggies were, corn (my favorite vegetable), and a brown peas and string beans mix, but it seemed as though there was no seasoning at all in my food. I’m all about watching salt intake, etc. But I don’t want to pay for food I have to season myself. I was happy that they had rutabagas though because for some reason they are hard to come by in restaurants.  I love vegetables so I didn’t complain too much but I was disappointed. On the next trip I had breakfast on the way to the doctor. All I asked for was fried eggs and grits. Let’s just say I was not a happy camper when I got to where I was going and opened my plate. My eggs were so little and dried out, I could barely chew them. My grits were chunky and watery at the same time. Where they do that at!? That was very confusing, and of course they didn’t have any salt. I called to complain this time as this was the 3rd or 4th time straight that I did not enjoy my food. They allowed me to bring back the plate for a refund, so I will give them that. I could tell the manager wasn’t happy about it though. I also have had good stuff there too here and there, but it’s not as consistent and mouthwatering as it used to be or as good as the other locations.

I still love eating food from Piggly Wiggly at other locations, but I’m giving the Faison location a C.