There’s a new girl in town

It seems like there is a curse over the Main St. building storefront restaurant in Kenansville. Has anyone else noticed how often the restaurant changes in that building? I don’t know why; It’s at a great location right in town. It’s close to the courthouse, many other office spaces, the board of education, and the hospital. It has a parking lot with adequate parking space, and even additional parking across the street. It has plenty of room for dine-in and even has an extended area upstairs. You can also go through the drive-thru if you don’t want to dine in. It appears to have all the amenities to set a restaurant owner up for success, but it also seems that renters are always in and out! Welp, needless to say…there’s a new girl in town, and the owner Buddy said that Madison’s is here to stay! 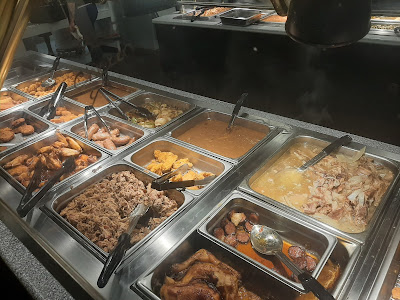 Madison’s opened up just a few weeks ago on September 24th by Buddy Madison Myers, a Sampson County Native. Before the Kenansville location, he ran Madison’s in Goldsboro for 20 years and had locations in Virginia as well. He began his career in the meat business at age 18 through supermarkets and restaurants. Buddy said he was raised on Southern food and was taught to cook by his mother. “After I got married, I learned to cook better for self-defense,” he said jokingly while I was chatting with him on my visit. One of his favorite things to cook is steak.

I asked him since he had other successful locations, why did he want to open up this location in little ol’ Duplin County.

“I think Kenansville needed a place. Duplin County has what 60 thousand or so people in it, and I wanted to have a place people can come for a good meal, and good southern food, at a good price. And I LOVE to cook! If you don’t love to cook, don’t get in the restaurant business,” he said.

I took a couple guest judges with me on this visit. My cousin Simone Murray and a friend and teammate Kenneth Williams. Simone is a counselor and basketball and softball coach at Wallace Rose Hill High School, and Kenny, as I call him, is a teacher and basketball coach at James Kenan High School. We were having some school rivalry bonding time. Ha-ha!

Madison’s is a buffet similar to the previous restaurant, Carolina BBQ, so we ate A LOT of different things. I had the peas, mac and cheese, sweet potato casserole, pork BBQ, sausage with green peppers and onions, pork chops also with green peppers and onions, and the vegetable soup. For dessert, I tasted both the banana pudding and the strawberry shortcake. My favorite things that I ate were the pork chop, BBQ, mac and cheese, and sweet potato casserole. I had seconds to have more of those foods. 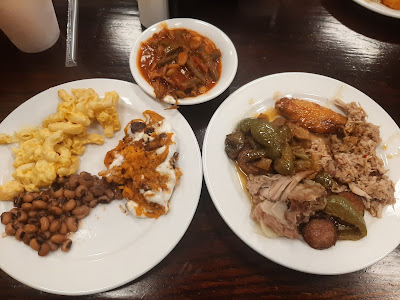 I’ve been wanting a good whopping serving of some good aunty's house mac and cheese, but I haven’t found any lately other than at Mae's Grill in Rose Hill, unfortunately, but the mac and cheese was pretty good. I really liked the barbeque because I like a good blend of vinegar and sweet and I feel like they did a good job at that. I also don’t like my barbeque dry, and it had a good amount of grease in it to keep it from being dry. The pork chop…omg! Now them thangs were tender boy! That was probably my favorite thing out of everything I ate. It just melted in your mouth. We all also tried their wings…we called them mystery wings lol Each one of us thought it was a different flavor. I thought they were teriyaki, Simone thought they were buffalo wings, and Kenny thought they were barbeque. We debated about those wings for a good 10 minutes, then finally I went to the buffet bar so I could get the official answer. Simone was right, they were hot wings. Hahaha! She is now the mystery wing champion. I enjoyed the banana pudding also, but the cake was a little dry for me. I heard they also have seafood items on the menu like lobster on the weekend if you’re into that.

The people were friendly and made conversation with us, and Buddy was full of jokes. Overall it was a nice dining experience. I enjoyed the food. It’s nice and spacious, and you will definitely leave full and satisfied. It’s not my #1 pick for southern food in Duplin County, but it’s very close to my house, and a way better option than a lot of the other options in Kenansville. I could see myself having some of my business meetings there because of the space and variety in the food. I will definitely be back there for sure.

I give Madison’s an A!