One of my favorite breakfast spots is actually inside a grocery store. Crazy right!? It’s probably not so surprising if you live in or near the Kenansville area because every morning IGA Foodliner has people lined up to get breakfast.

IGA is a grocery store that has 2 locations in Duplin County. Beulaville is the second location, and both locations sell food from 7:00 am – 7:00 pm seven days a week. Leo Jackson first purchased a dry food store in 1945 which he ran for 24 years, and by 1969 he created the IGA that we know today. He ran IGA until his death. The store has continued to be in the family ever since, and is now operated by 3rd generation David Jackson. 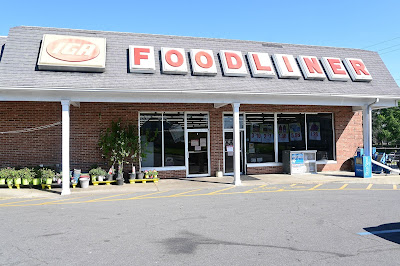 Fun facts I learned today is that the grey speckled floors that are in there are original and have been there since it’s opening, and that Kenansville which I visit frequently was the original store. 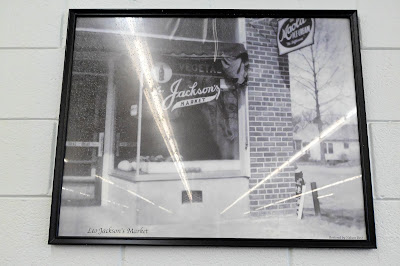 The “hot bar” as they call it was introduced to the store in the early 80s, and serves country-style breakfast. I love it! It’s good food for a great price! David said they are able to keep their prices low because of the fact that they are a grocery store and can get their supplies in house. Today I got cheese grits, fried eggs, smoked sausage, and their popular cheddar biscuit. My plate was only $3.99! You can’t beat that. And the variety is what I love! If you don’t like cheese in your grits, don’t worry because they are going to have regular grits and rice. Don’t want sausage with your breakfast? Hey, try the fried bologna, or breakfast beef steak patty. I swear they have every version of sausage there is! LOL! They are going to have options for you no matter what you like! 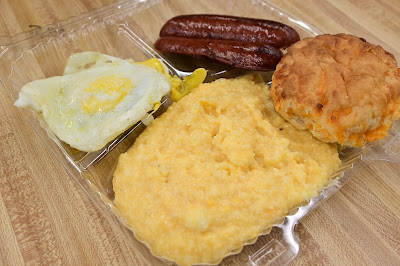 I loved my cheese grits and sausage combination. Very tasty, and I didn’t have to add any salt because the grits were already seasoned nicely. The cheddar biscuit….man….the cheddar biscuit. I have been looking at that thing every time I go in there with my mouth watering, but because of my attempt to cut back on carbs have been avoiding it. Today I gave in for research purposes for the column of course (winks). It was definitely as good as I imagined.

As I mentioned earlier, they have more than just breakfast. Each day they feature certain popular items. According to the training manager, Tammy, some of their customer’s favorites are bacon (which is their top breakfast seller), fried chicken, spare ribs, meat loaf, and lasagna. People love their special food days like the ox tails they sell on Thursdays, liver pudding on Fridays, fish and chitterlings on Saturdays. People also love their made-from-scratch cakes. 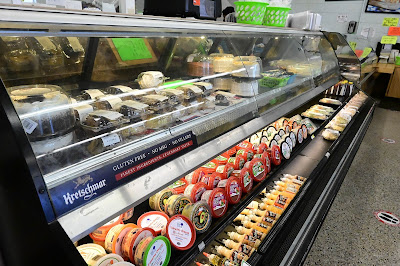 The hot bar sees customers from all over not just Kenansville. Whether it is people that work at the courthouse or local businesses, people traveling through for work, or local residents, the fact is that people love the food from IGA, and I am a part of the number! I give the IGA hot bar an A+!